Block the Boat: Stop Israel Action at the Port of Oakland

Block the Boat: Stop Israel Action at the Port of Oakland 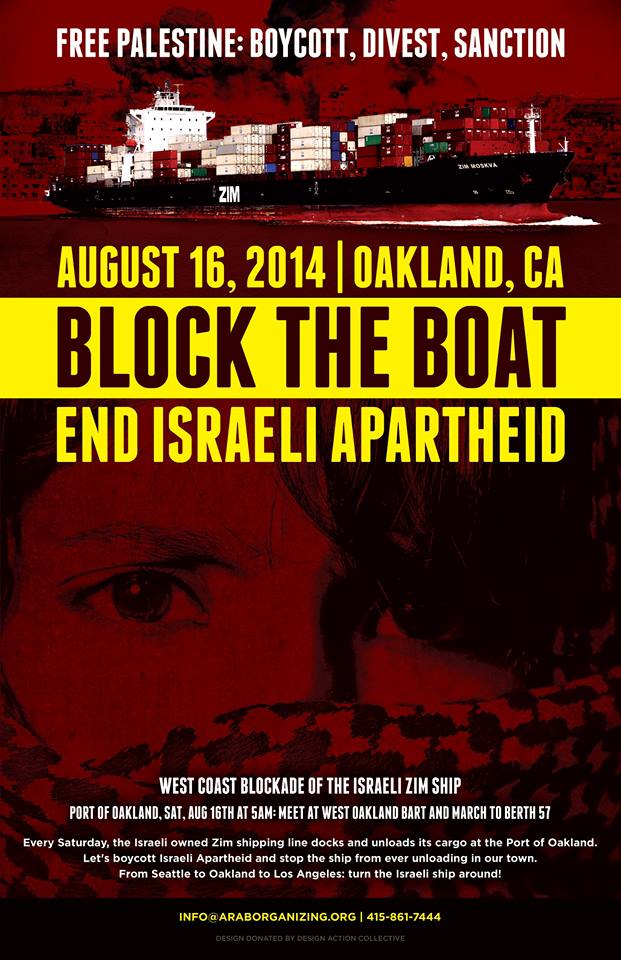 Zionism isn’t welcome in our town!

Block the Israeli Zim Ship at the Port of Oakland
Saturday, August 16th
5am – meet at West Oakland Bart and march to Berth 57

STOP THE SIEGE ON GAZA!
END THE COLONIAL OCCUPATION OF PALESTINE!
RIGHT OF RETURN FOR ALL PALESTINIAN REFUGEES!
FREE ALL POLITICAL PRISONERS!
BOYCOTT, DIVEST, SANCTION!

What’s happening?
The world has watched in horror as Israel has continued to bombard and devastate Gaza. Millions around the globe have come out in support of the Palestinian people and against the Zionist regime, holding massive marches, demonstrations, and actions. Here in the Bay, San Francisco witnessed some of the biggest mobilizations in recent years, with a series of marches, each bringing out thousands of people. It’s time to step it up.

Call to Action
Palestine is calling us to action! Palestinians laborers, Palestinian General Federation Trade Union (PGFTU), have called on workers around the world to refuse to handle Israel goods. Palestinians throughout Gaza, the West Bank and 1948 Palestine have demonstrated their unity in the struggle against Apartheid Israel and have taken to the streets in the tens of thousands, bravely facing Israeli military armed with US made weapons to call on the international community to stand with them as they resist Zionism throughout all of historic Palestine. We will be answering this call by organizing community pickets at the Port of Oakland, asking the longshoreman to honor this request and to stand with the people of Palestine as they have done in the past.

Historical Background
During apartheid in South Africa, ILWU workers made history when they refused to unload South African cargo in San Francisco in 1984. This action was a major catalyst for international anti-apartheid solidarity and struggle worldwide. In 2010, after a Turkish flotilla, the Mavi Marmara, was attacked by Israel for attempting to bring humanitarian aid to Gaza, we built on ILWU’s history and successfully blocked the Israeli Zim ship from being unloaded at the Port of Oakland — the first time in US history an Israeli ship was blocked. We will be continuing this legacy by organizing to block the Israeli ship once again. And just as apartheid fell in South Africa, so too it will fall in Israel!

Sustained BDS in the Bay
If there is one thing that the latest Israeli attacks show, it’s the power of Palestinian resilience. The resistance in Gaza is still alive and thriving, despite Israel’s ongoing attempts to destroy it. But we should always remember that the Palestinian resistance did not begin with Israel’s latest bombardment, nor did it begin during the last bombardment. It has been going on since 1948, since Israel came into existence. And it will not cease until Israeli apartheid falls.

We refuse to allow Israel to conduct its business as usual, here in the Bay and everywhere!

Every Saturday, the Israeli owned Zim shipping line docks and unloads its cargo at the Port of Oakland. Let this action be the beginning of a sustained campaign to stop the Israeli ship from ever unloading in our town.

From Seattle to Oakland to Los Angeles – turn the Israeli ship around!

We encourage all of our allies on the West Coast to join us in ensuring that Zim ships are not welcome anywhere.

Not in the Bay