Marking a key milestone in its development, LeftRoots held its first National Congress in Oakland, California from February 15 to 18, 2018. Roughly 200 LeftRoots cadres travelled from various corners of the United States to attend. In preparation for the Congress, these cadres had been participating in rigorous study, discussion and debate over an initial strategy document, We Believe that We Can Win. Developed by a nine-member Strategy Lab Advance Team, We Believe…would serve as the basis for identifying areas of alignment and disagreement within this national formation of Left social movement organizers and activists.

In looking towards the Congress, LeftRoots had four overall goals: 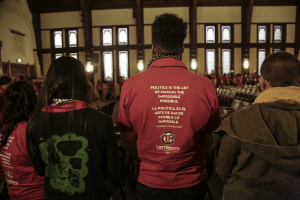 From the outset, cadres received a warm welcome with a range of LeftRoots swag, from a t-shirt and a red-and-black scarf featuring the iconic phrase “¡make the impossible possible!” by Chilean philosopher Marta Harnecker (who prepared a solidarity greeting) to a small notebook, LeftRoots stickers and pin buttons.

With its theme of “Seeing what’s Possible,” the first day started with a grounding honoring cadres’ ancestors. Through a collective breathing exercise, cadres honored the indigenous peoples’ land upon which the four-day event would be taking place, remembered the revolutionary history of the Bay Area, and shared deep gratitude to all of those who paved the way for this first Congress. Cadres also remembered the four-year history of LeftRoots, touching on the growth it has made and scale it has achieved in a relatively brief period of time.

In the afternoon, cadres participated in two key exercises.  Focused on the need to strengthen collective vision, the first exercise called for cadres to break into small groups to practice making assessments, refining their strategy. Called “The Story of How We Won,” this exercise emphasized the challenge of dealing with a rapidly changing political moment, forcing each of the small groups to adhere to their vision of socialist liberation, while responding to a series of scenarios. In contrast, the second exercise introduced cadres to examining both the correlation and momentum of forces to make a conjunctural analysis of the various factors shaping the current moment’s strategic implications. Working again in small groups, cadres pieced together a shared assessment of the current conjuncture, particularly the strength and character of forces on the left and the right. At the end of this exercise, each small group offered its assessment of Left social movement forces, ranking them as closer to being in “disorientation”, than “an accumulation of forces,” and a long way from “a revolutionary,” or even, “a pre-revolutionary moment.” 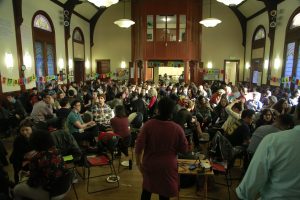 The second day’s theme was “Trust through Rigor.” Recognizing the importance of culture as a weapon in political struggle, LeftRoots cadres observed a Dragon Dance, a traditional Chinese performance celebrating the Lunar New Year. Cadres then moved into a spectrogram exercise, organized to illustrate the range of opinions on some of the most contentious hypotheses in We Believe…. Identified through a pre-Congress cadre survey, these hypotheses included:

Facilitated so as to model principled and comradely debate, this exercise sparked a rich conversation that helped identify areas of growth for cadrefication and to deepen analysis with an eye towards the 2021 Congress. In contrast to the morning’s exercise, the afternoon schedule offered cadres an opportunity to participate in a range of breakout sessions. In these sessions, cadres met according to their caucus, praxis circles, or working groups to prepare strategies and explore joint work to be carried out after the Congress. This second day also featured the election of LeftRoots’ National Secretary, with cadres tapping Steve Williams from the Bay Area chapter to continue serving in this role for the next two years. And to close out the day, the National Coordinating Committee hosted a consulta, an open question and answer process through which cadres provided input and feedback on the organization’s strengths and weaknesses. 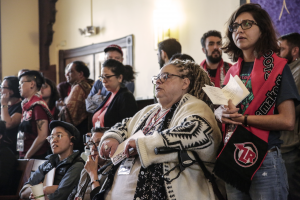 The third day set the tone for launching the next phase of LeftRoots’ development. Under the theme of “Ready to Struggle, Ready to Learn,” cadres once again met in their praxis circles and working groups to further their strategic analysis and firm up several proposals for joint work. The day’s schedule also set aside time for the members of each of the seven branches to meet, including those located in the Bay Area, Los Angeles, New York City, Boston, and Philadelphia, as well as the two at-large branches, which held their first in-person meetings. These breakout sessions provided branch members with an opportunity to collectively reflect on their experience of the Congress and brainstorm how best to advance the call for organizational growth and cadre protagonism. The closing for the third day highlighted the range of political experience within LeftRoots, with cadres identifying their formative moments of politicization during decades that ranged from the 1960s to the 2010s. Standing shoulder to shoulder, cadres arranged themselves in a large circle and sang “I’m a socialist,” a song inspired by the South African Freedom struggle and used to end branch meetings.

Just as each day of the Congress had been designed to strengthen different analytical skills and political capacities, each evening included an event that prioritized camaraderie, creativity, and simply enjoying each other’s company. From dining together at a local Vietnamese restaurant to cheering on cadre performances in the inaugural “No-Talent talent show” and enjoying the Oakland nightlife (in their LeftRoots t-shirts), the first National Congress gave cadres ample opportunity to form and deepen relationships amongst comrades. 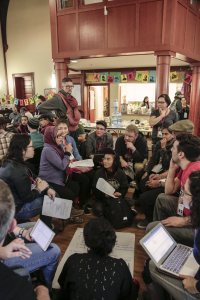 On the fourth day, the Congress ended with an opening weekend viewing of the movie Black Panther. Prior to this exclusive screening, a panel of LeftRoots cadres spoke to the political and cultural significance of 1960s era Black Panther comic as well as the movie’s resonance with contemporary politics. Afterwards, many cadres left for the airport, while others used the last few hours together to share a meal or visit the Redwood National Park.

Following the Congress, all of those who has been in attendance spoke of their greater sense of LeftRoots as a consolidated force, while also expressing a sense of feeling more connected to the individuals in it. By bringing cadres together from around the country, the Congress succeeded in leaving a lasting impression on cadres of their role within the organization as well as their collective capacity. Moreover, most of those who attended expressed a deeper understanding of LeftRoots and a commitment to taking on work within the organization, while many of them also conveyed a greater sense of clarity about the Strategy Get Down process and a willingness to play a leadership role within this process. Overall, the 2018 Congress laid a significant foundation upon which LeftRoots cadres will look to build over the months and years to come.